Days like this it’s difficult to know where to start. I’ve spent most of the week sifting through your despairing emails in the wake of my recent column about the Black Lives Matter madness.

Sorry if you’ve not had a personal reply. After the first few hundred I ran out of road. But please let me reassure you. You’re not alone. The world really has gone rip-roaring bonkers.

Are you sitting uncomfortably? Then I’ll begin. Our fantastic voyage today begins in North Devon, hardly a multicultural melting pot.

For the past 18 months, the local council has been running a campaign called Dog Fouling Matters — to encourage people to use pooper scoopers and plastic bags to clear up after their pooches. Posters have been put up on lamp-posts and public buildings.

Now, though, they’ve all been taken down after a single complaint that the campaign was RAY-CIST!!!! and offensive to the Black Lives Matter movement.

Boris is buffeted like a drunk trying unsuccessfully to master a Segway, permanently on the brink of going base over tip

Under normal circumstances the complainant, a woman called Yasmin Beck, would go straight into the play-offs for this year’s Here We Go Looby Loo Awards.

But instead of telling Beck to grow up, go away and get a life, the council capitulated immediately and issued a grovelling apology.

Not only that, they also put out a statement pledging full support to BLM UK. Why?

Why the hell is a local authority based in a backwater like Barnstaple paying obeisance to a noble cause hijacked by an anarcho/quasi-Marxist bunch of thugs who commit criminal damage in support of aims including smashing capitalism and abolishing the police?

It only goes to show the effectiveness of this insane insurrection cooked up by the middle-class, far-Left extremists behind Black Lives Matter, with the craven complicity of the broadcast media, the political class, academia, big business, local government, what remains of our once-impartial civil service, and, shamefully, the upper echelons of the Old Bill, too.

The entire Establishment is living a lie. For instance, two days after the arrest of a Libyan immigrant on suspicion of the brutal murder of three men in a Reading park this week, Scotland Yard’s most senior counter-terrorism officer, Neil Basu, warned on the BBC that Britain faces a grave threat from, er, ‘Far Right’ terrorists.

He calculates cynically that it’s the best way of worming his way into the Commissioner’s chair when Dick of Dock Green calls it a day.

Basu has built his career on bigging up the ‘Far Right’ threat, even when crazed Islamists were killing and maiming hundreds of commuters on London’s transport network, slaughtering children at a pop concert in Manchester, and stabbing to death a fellow police officer at Westminster.

Among my emails, there have been plenty from ex-coppers, up to and including chief constable level, expressing their shame at the politically motivated depths to which The Job they were once proud to serve has sunk.

Welcome to the Summer of Stupidity 2020

I’ve also heard from former football officials and ex-pros who wonder if they would have had the courage to refuse to ‘take the knee’ before games — given that the confected outrage at their failure to fall in line might have cost them their careers.

Frankly, I’ve had it with professional football, despite following the game all my life and having been a season ticket holder at Tottenham for 35 years.

Why should I carry on giving money to a rapacious, amoral industry which is offering ostentatious support to an intolerant revolutionary group waging a violent campaign of intimidation, intent upon destroying society, ending free speech and ripping up our history?

The Premier League was at it again this week — multi-millionaires kneeling like medieval supplicants and sporting their crass BLM badges.

Where was the minute’s silence for the victims of the Reading outrage, while they were at it?

How many of those players, currently protesting against centuries-old slavery, will refuse to take part in the World Cup in Qatar, which will be staged in stadia built by the modern equivalent of slave labour? Precisely.

Our allegedly Conservative Government, supposedly bolstered by an 80-seat majority, is so consumed by the coronavirus catastrophe, it is terrified to stand up to the Black Lives Matter mob.

Foreign Secretary Dominic Raab makes a harmless joke about only bending the knee before his wife and Her Maj. Five minutes later, after the predictably tedious Twitter storm of condemnation, he is reduced to putting out a pathetic official apology for any ‘offence’ he may have caused.

Get off your knees, man. 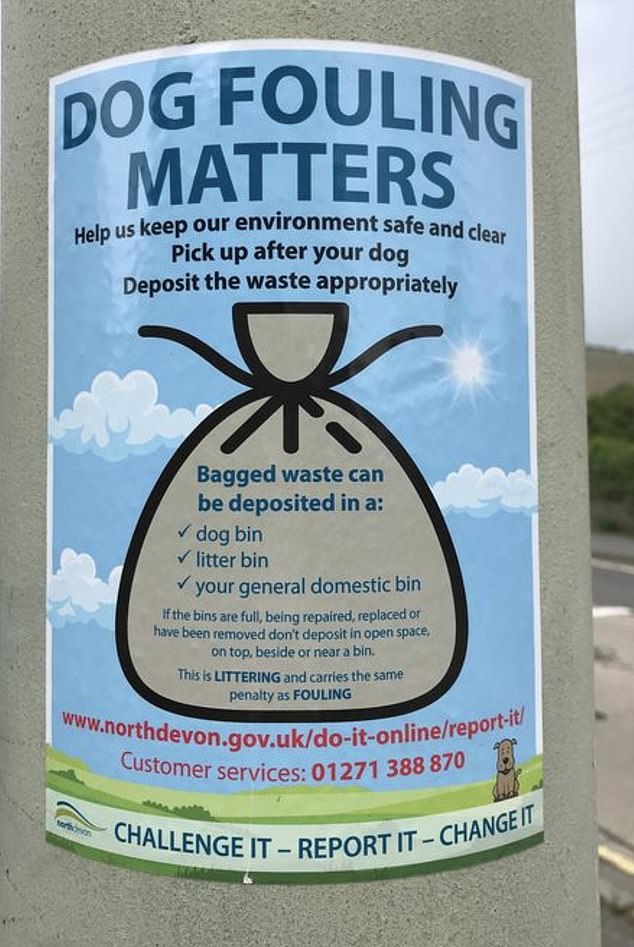 For the past 18 months, North Devon council has been running a campaign called Dog Fouling Matters — to encourage people to use pooper scoopers and plastic bags to clear up after their pooches. Posters have been put up on lamp-posts and public buildings

Meanwhile, Boris is buffeted like a drunk trying unsuccessfully to master a Segway, permanently on the brink of going base over tip.

The Bank of England reveals we were within an ace of the whole economy going belly-up a few weeks ago. Yet teenage Chancellor Rishi Sunak has no plans to end his ruinously expensive furlough scheme until October.

So on the hottest day of the year so far, hordes of people are being paid to live it up at the seaside, at taxpayers’ expense.

Almost a year ago to the day, I was in a field off Hampstead Heath, in North London, with about ten thousand others, bouncing along to Madness in a torrential thunderstorm.

I can remember thinking at the time — it doesn’t get much more bonkers than this.

Little did I know then. Dancing in the dark, soaked to the skin, to the heavy, heavy monster sound of Madness, now seems like the height of sanity compared with the Summer of Stupidity 2020, where we find ourselves now.

More from Richard Littlejohn for the Daily Mail…

There’s not room here to list the whole catalogue of lunacy masquerading as the ‘news’ this week.

So here’s a random selection — from the statue of pioneering feminist Nancy Astor being vandalised because she’s a ‘Nazi’, to the 43-page Government elf’n’safety advice on how to buy a pint of bitter. We’re talking booze-ups and breweries here.

I warned you a couple of weeks ago that the ‘new normal’ was going to be ten times worse than the lockdown. Was I right, or what?

I also predicted that the Black Lives Matter riots were your starter for ten. That seems to have been borne out by the brawling in Brixton on Wednesday night. Shopping with violence, 2011-style, can’t be far behind.

Has the Government published any official guidelines for socially distanced looting yet?

Still, look on the bright side — you can now get married, but you can invite no more than 30 guests from a maximum of two families, or something. I guess you could always pretend your wedding reception is a Black Lives Matter rally, then Plod will leave you well alone.

Churches can open, but hymns are banned. In Australia, someone claims chess is RAY-CIST!!! because the white pieces always go first. That’ll be taken up here by this time tomorrow.

Soon every chess set in Britain will have to be thrown on a skip. The police, under the command of the bold Neil Basu, will start raiding illicit gatherings of chess enthusiasts and arresting them for ‘Far Right hate crime’.

Elsewhere, strippers can resume work, but only if they wear face masks. You can get your hair done, but not your nails. And you can play tennis, but not cricket.

In Aberdeen, a man is convicted of a ‘racially aggravated’ crime for calling someone a ‘leprechaun’.

Oh, and Rod Stewart has announced he’s planning to erect four topless statues of ancient Greeks at his home in Essex. I give it a week before an anti-slavery mob pulls them down.

Breaking news — in Devon, the streets of Barnstaple are once again carpeted in dog mess, so as not to cause offence.

Welcome to the House of Fun. Maybe we should buy Boris a fez and then we can all dance along behind him, like the Nutty Boys — remembering, naturally, to bend the knee at all times.

One Step Beyond! Actually, my problem is not so much where to start, as wondering where it will all end. We are all going to hell on a Segway.