The headline photo you see is nothing but the concept for a project between GM and Segway dubbed the Puma, short for Personal Urban Mobility and Accessibility. Sadly, the design we saw in comparison to the design we got is completely different. But why?

My money’s on the fact that the concept leans on the glass casing as it is open. Something very difficult to do without bulletproof glass. This didn’t stop GM and Segway from pushing through with a street-ready design. But, really? This is really what we get?

It sure is. The mission was to create a two-seater with zero emissions looking to revolutionize urban mobility, and it does offer those two things. There is space for two people in it, albeit, not your average Joes. These have to be some grass-fed vegans, because it really looks cramped in there. And it does offer a zero-emission ride due to similar Segway tech found in the original two-wheeler.

But that doesn’t make up for its lack of visual appeal. Before anything else, the first thing I spotted was the yellow and black roll-cage, or frame. It literally looks like someone forgot to take the packaging off, or maybe because it’s the test model. We then see a large glass windshield that, unlike the E4U, covers the entire vehicle, offering protection to the passengers.

Similar to the E4U, the passengers are in a seated position. The supports for the passengers also look like the seats to a sports car. This is because this little speed-demon can have a 35 mph (56 kph) top speed. This might be the reason for the roll cage.

Another feature that seems to have been needed are the four stabilizing wheels. Two in the front for sharp braking maneuvers, and two in the back for when taking off on a rocket-propelled port-o-john. Sure, 35 mph may not seem like a big deal, but when you’re maneuvering through traffic, on sidewalks, on piers and bobbin’ and weavin’ through pedestrian traffic, safety becomes a major issue. 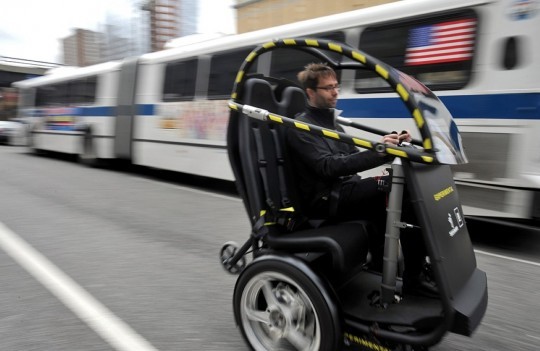 To take care of the safety issues that may arise during a ride, GM had a plan to incorporate smart on-board software that allows for vehicle-to-vehicle communication, adaptive cruise control, and GPS, all in real-time feed. This is all done with the idea of integration in mind. But this integration relies on other vehicles to also have the same capabilities, something we aren’t really seeing.

The Puma used a battery of lithium-ion cells, which offered a 35-mile (56 km) range on a full charge, but no mention as to how long that full charge takes. But we have already seen this type of tech being surpassed with diverse elements like ultracapacitors.

One of the major selling points for this idea was that it only weighed 700 lbs (317 kg) and used nearly 80% less material to build than your average car. But I’m not sure if all this was enough to get these onto our streets, as more are seen in China than in the U.S.

Vimax Assessments – Is Vimax Safe And What is The Dosage For…

Contrast In in between Mesopotamian as well as egyptian Beli…